Chris Farley Died At Age 33 Or Did He Fake His Death? 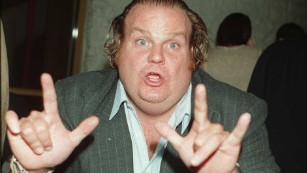 Chris was found dead by his younger brother, John Farley who just happens to be an actor and entertainer.

I found it interesting the Chris's father Tom Farley owned an oil company. His brother Jim Farley is the CEO of Ford Motor Company Europe.

An autopsy later revealed that Farley had died of a cocaine and morphine overdose early that morning.

There is always comparisons of Chris Farley and John Belushi, two former Saturday Night Live Alums, who happened to allegedly both died of drug overdoses at the age of 33. I believe John Belushi faked his death just like Chris Farley. I wrote about it here.

Chris Farley just happened to have 2 movies that were coming out in 1998. One was Almost Heroes and the other was Dirty Work.

Chris Farley was rumored to have substance abuse problems leading up to his death.

I think Chris Farley did have problems abusing drugs and the cause was probably show business taking its toll on Chris. Being in the public spotlight on a massive scale like Chris Farley was leads to a lot of stress and probably wears down some entertainers and sometimes people want out.

I think Chris was offered a way out via faking his death via drug overdose. So he is basically faking his death and when people hear about that it was caused by drugs they think drug use in this country is out of control. I think drugs are bad and people shouldn't use them, but the War on Drugs is not real.

Our society is made to believe law enforcement should receive all this money to fight widespread drug trafficking and drug abuse. I don't think it's nearly as bad as the media portrays it. But when celebs are reported to have died of drug overdoses allegedly, it reinforces in people's minds how important it is to give law enforcement tax payer money to fight this "war".

Celebrity drug related fake deaths like Chris Farley and John Belushi are used to promote the War on Drugs and drive home the message to the masses that drug use is so out of control we need to fund a War against it.