Did Thurman Munson Fake His Death? 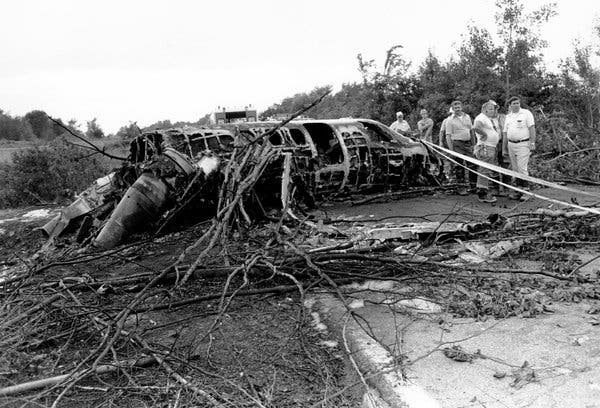 Thurman Munson was the famous New York Yankees Catcher on the 1977 and 1978 World Champions. But allegedly he died on August 2, 1979.

The New York Yankees were looking to win their 3rd straight championship in 1979. By August of 1979 the Yankees were in fourth place and 11 games out of first the day Munson supposedly died. Only four teams total made the playoffs back in the 1970s, so the Yankees would have to be in first place by the end of September to get into the playoffs and they weren't looking good being in fourth.

Munson was coming to the end of his 11th season when "died", all with the New York Yankees.

According to the news report of his death on August 2, 1979, Munson was practicing takeoffs and landings at the Akron-Canton Regional Airport with friend Jerry Anderson and flight instructor Dave Hall. On the fourth touch-and-go landing, Munson allowed the aircraft to sink too low before increasing engine power, causing the jet to clip a tree and fall short of the runway. The plane then hit a tree stump and burst into flames on Greensburg Rd., 870 feet short of runway 19.

Munson suffered a broken neck and would have most likely been a quadriplegic. Munson "died" of asphyxiation due to the inhalation of superheated air and toxic substances allegedly.

On August 1, 1980, the day before the first anniversary of the accident, the Yankees filed a $4.5(4+5=9, 9 an important occult number) million lawsuit against Cessna Aircraft Co. and Flight Safety International, Inc. (the company who was training Munson to fly), with team spokesman John J. McCarty saying "we asked for $4.5 million because that is what Munson would be worth if the Yankees traded him."

That is basically explaining how the Yankees are going to get compensation for going along with this fake death.

Munson's widow, Diana, also filed a $42.2 million wrongful death lawsuit against the two companies. Cessna offered Munson a special deal on flying lessons if he would take them from FlightSafety International. Rather than requiring Munson to take a two-week safety class in Kansas, FlightSafet assigned a "traveling instructor" to go on the road with him, and train him between ballgames. The suit was eventually settled out of court.

The out of court settlement was the payout to Thurman Munson for faking his death.

Why would Thurman Munson fake his death?

First off, I think there is an agenda, even back 40 years ago, to get the masses scared about flying commercial planes and private planes. The powers that be don't want the masses going around flying planes and feeling comfortable about traveling in such a way. Plane crashes strike fear into the public.

Frequent plane crashes were reported in the news in the 20th century, commercial and private airplanes. If you look into them, most if not all are faked. The point is to get the masses afraid of this great way to get some place really fast.

9/11 was the ultimate blow delivered to flying planes. I don't think any planes hit the twin towers on 9/11, but one of the purposes of 9/11 was to make people afraid of flying. Heavy restrictions on flying went into place after 9/11. The TSA was brought in to airports to humiliate the public at airports with all the groping and pat downs and taking off of clothing.

Along with the TSA at airports, more restrictions were placed on private jet owners wanting to fly after 9/11. 9/11 did a lot to restrict air travel and it's never been the same, when it used to be plane flying was a very nonrestrictive experience.

It seems to me that with all these plane crashes that have been faked over almost 100 years, that there is a Freemason/Occult/Secret Society program, where you can fake your death via plane crash to promote how dangerous flying planes are and get a nice pay out.

That is what I think took place here with Thurman Munson. He was given an option to retire from baseball and the public arena via plane crash and get paid to do it. If he got around 42.2 million dollars in 1980, in today's dollars that is $122.4 million. I'd say that's pretty good for calling it quits and going to live in Ohio.

According to people surrounding Munson, he was looking to retire soon because he was frequently becoming homesick (he and his wife and kids lived in Ohio, but he played in New York) and wanted to play for the Cleveland Indians. The reason he had a private jet was because he wanted to fly home to his family on off days from playing for the Yankees. Also at 32 years of age the injuries from being a catcher were piling up. A catcher in baseball is probably the hardest position because of the collisions at home plate and the constant stance of crouching takes a toll on the knees.

Let's not forget Munson and the Yankees were 14 games out of first place on August 1st (the day before he allegedly got killed) and the chance of making the playoffs and going back to the World Series for a third straight time was a long shot.

There were also a lot of rumors that Thurman Munson really wanted to retire at the end of the season.

I see there is a lot of occult numbers with Thurman Munson's final stats for playing Major League Baseball at the time he allegedly died:
To me this looks like a fake death. I think Thurman Munson was a freemason and introduced to the occult at some point in his playing career, like most professional athletes are. I think there is a Fake Death Option given to celebrities and professional athletes with a nice pay out to promote an agenda.

Thurman Munson looks like he took advantage of this and I guess it worked out well for him monetarily and he won't get noticed in Ohio. Perfect place to reside and be away from the public eye. That is where recluse comedian Dave Chappelle lives, who just happens to now be an OBE or Order of the British Empire (everyone thought he spoke out against the system, but he's OBE).