Bill Hicks Faked His Death But He Isn't Alex Jones 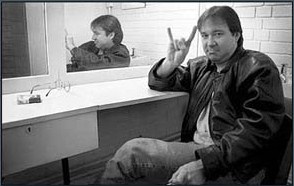 Most of Bill Hicks stand up included a lot of anti establishment stuff.  This included a wide range of social issues including religion, politics, and philosophy, was controversial, and often steeped in dark comedy. He criticized consumerism, superficiality and banality within the media and popular culture, which he characterized as oppressive tools of the ruling class that keep people "stupid and apathetic.

Hicks often discussed the assassination of President John F. Kennedy. He mocked the Warren Report and the official version of Lee Harvey Oswald as a "lone nut assassin, even though I have concluded that nobody died in the Kennedy Assassination and it was all a staged Psyop. Check out this very well written expose' of the JFK Assassination as a Hoax.

This is why Bill Hicks was thought to be speaking for the masses or the people. As you can see from the above photos, he was very much in on the scam. Freemason indeed.

He allegedly died of Pancreatic Cancer. Was an offer made to him to fake his death to promote the Cancer agenda? When the masses know a celebrity gets cancer, they accept cancer as normal and part of life, as opposed to questioning what it really is and how the medical and pharmaceutical industry makes a lot of dough off of cancer.

You have to remember Bill Hicks wasn't getting any permanent gigs in show business. He was journeying through stand up comedy. On the road, grinding it out traveling. He wasn't getting any acting roles on TV or movies which is where most successful comedians end up.

In show business and the music business, they have a job called disappearing. As long as you promote an agenda, you will be compensated monetarily. Ab Irato of Fakeologist.com has a term for this called The Dead Celebrity Program. This is what I think Bill Hicks did. Fake his death and it was said he died of Pancreatic cancer.

Bill Hicks has been accused of faking his death to become Alex Jones. I don't agree with this at all. I could see that Bill Hicks and Alex Jones are related but there is no reason for Bill Hicks to become another person when he could have just moved into the fear maniac Alex Jones role anyway since he was getting no permanent work to begin with.

I think the Alex Jones Bill Hicks talk is part of a Psyop to get people stuck in a stupid debate about Entertainers faking their deaths to become other actors. Dallas Goldbug promotes this heavily and he is COINTELPRO. All the Bill Hicks Alex Jones talk does is promote disagreement and wastes time.

I think by design they had Bill Hicks at Waco when Alex Jones was there reporting in the early 1990s so they could use it later to get people spinning their wheels, getting nowhere with it. Bill Hicks was already questioning the guilt of David Koresh and the Branch Davidian compound during the Waco Siege in his act on stage.

Waco was a staged Psyop Hoax to begin with.

Bill Hicks faked his death, but most likely is somewhere is Arkansas where he is alleged to have died.